Here are three things to Look for in Large LED Signs

Large LED Signs, LED walls, LED screens, video walls, and direct view LED–you may have heard all of these names referring to the same basic thing: a large LED digital screen that displays some kind of a message. What matters most for your business is not what the sign is called, but how you use it. Here are some of the important factors you will want to keep in mind when purchasing any kind of digital signage.

Multiple parts or one?

A lot of Large LED signs and video walls out there are not just one single screen, but many tiled screens put together to project a single image. The reason for using tiled screens is to end up with a higher resolution than you would with a single screen of the same size – each individual tile is clearer and more detailed than one larger screen. Add in the highest pixel pitch available at 6mm, and you have crisp clear Large LED signs to show off your message. MEGA LED Technology can help you attain that goal.

Tiled LED screens are useful for covering large areas, or curved walls. They allow businesses to mount their screen in a unique shape to create a more appealing overall effect. Take a look at how some businesses utilize the spacing of their digital signs for more effective advertising.

On the other hand, there are some advantages to using a single LED screen, instead of many. Tiled screens tend to be a little pricier and more difficult to operate. A single-panel screen may not give you as high of a resolution, but it will be more affordable and easy to manage.

As a general guideline, you should look into tiled screens for larger displays, like in stadiums or concert halls, and single-panel screens for smaller displays and advertisements. If you’re interested in these large displays head over to our Large SMD indoor Display page, and check out some of the Large LED signs we’ve put up for concerts, mega churches, and more! 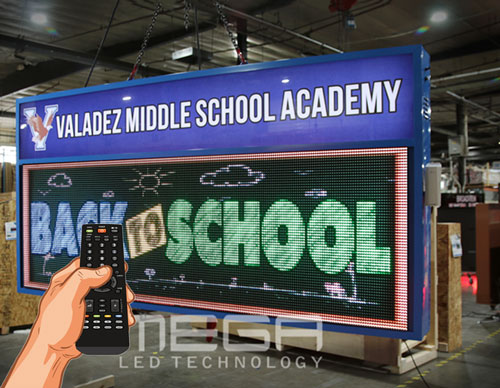 The great thing about most modern Large LED signs is the fact that they come with an easy to use and configure remote controller. These intuitive QWERTY remotes, mimic a keyboard, but on a smaller scale, and allow the owner to just type in a few words, and you see exactly what you want on your Large LED sign. If you are using digital signage for a large video display, it is obviously important for it to be easy to control. The best digital screens out there use video controller hardware that allow you to easily manage your display. The video controller will allow you to switch between videos and animations, as well as turning the screen on and off, adjusting brightness, etc. You shouldn’t have to be a tech expert to handle your video screen or video wall – the right technology makes it easy. 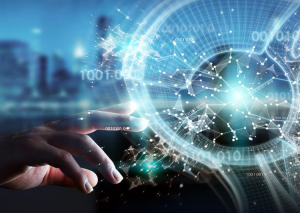 To make things easier for yourself, you should work with a trusted, established company to install your video screen or video wall. It doesn’t matter if it is a giant concert hall screen or just a simple sign to display an advertisement outside your business – MEGA LED Technology will be able to help you get the job done.

Digital screens are a great way to boost your business, whether you are using them for advertising or entertainment. LED technology is on the rise, and now is the best time to take advantage of it. Reach out to MEGA Technology today to get started on the track toward a more successful business.

When Nothing Else Works, Restaurant Owners Turn to LED Signs

Craft the Perfect Holiday CTA With A Premium Sign