Dramatically Increase Outreach with LED Signs for Schools and Universities

Old-school reader board signs with changeable letters just aren’t practical anymore. For starters, traditional signboards limit the way you can deliver messages and how quickly you can deliver those messages. They’re also easy prey for vandals. And the real kicker is, well…students and parents usually just don’t read them.

In today’s world where information needs to be delivered faster than ever, reader boards just don’t cut it anymore—especially when compared to modern, efficient, powerful LED Signs for Schools. 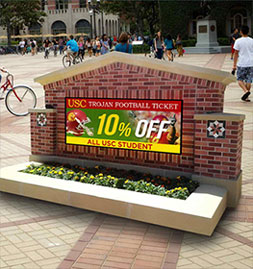 LED Signs for Schools solve all of the problems traditionally associated with older signage in a big, big way.

First of all, LED signs are capable of displaying scrolling messages, videos, animations, rich color and other details that just aren’t possible on traditional signs. That adds up for much increased visibility among campus visitors.

But besides being visually appealing and making people want to read their content, LED Signs for Schools are simply more visible than old-fashioned signage. Outdoor LED signs are readable over much greater distances, and their brightness allows them to be seen through light smoke—keeping your campus and your community up-to-date in even the worst-case scenario.

Uses for LED Signs for Schools 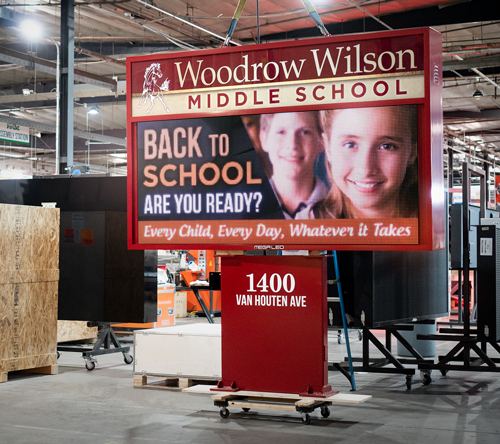 School signs are incredibly flexible and powerful, enabling you to promote nearly unlimited types of messages whenever you want with software that allows rapid changes and customizations.

The real power of LED signs is your ability to alter messaging on the fly, rapidly switching to more relevant messaging without waiting for inclement weather to pass, or for those lost vowels from last week to turn up.

Are LED Signs for Schools Worth It?

This question comes up a lot, and the answer isn’t that complicated. Many organizations and businesses balk at the upfront cost associated with LED signs, forgetting just how much advertising can cost through television, print or radio.

But what so many schools overlook is that LED Signs for Schools are one of the only forms of advertisement that are actually considered an asset.

LED Signs for Schools—unlike a TV commercial or a newspaper ad—belongs to your school. And with hefty warranties and long lifespans, LED signs quickly generate a big return on your investment that keeps on giving, year after year after year, long after that traditional sign has faded and lost all of its advertising power.

Simply put, an LED sign for school outreach is one of the best and most cost-effective advertising tools available today for both small campuses and sprawling universities, offering unparalleled flexibility and reach that more traditional forms of signage just can’t touch.

So yes, LED signs are absolutely worth the initial costs—just ask the many schools across the country who have already adopted LED signage and are loving life. IF you want to  upgrade your existing sign, or purchase a brand new one, contact us for a free quote.

Make Back to School More Fun back to school signs

Electronic Signs for Schools: A Must Have Tool in Schools and Universities

Graphics or Text for School LED signs? Which is better?