He was deadly serious! Our competitor’s LED sign was less expensive than ours and the church voted to go with them. Price was all they cared about. They never looked at the specs. I know you’re thinking, “we would never do that.” Really? Maybe not. But you would be amazed how often this happens. I said to the brother, “Send me their quote. You can blackout their price, just send me their specs.”

I used to work for that other company, and I know if we are comparing apples to apples not only are Mega’s LEDs specs much better but our price is usually much lower. I had quoted a 6’x10’ sign with a 3’x9’ high-definition 16mm LED on an eight-foot pedestal like the example below. 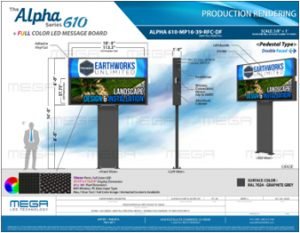 I received the competitor’s quote via email, and the price was blacked out. One glance and I could see why their product cost less. They were preparing to sign a quote and place a deposit on a sign that was 5’x8’ with a 3’x7’ 20mm LED (lower/worse resolution). It did have a comparable eight-foot pedestal.

Well, I prepared the quote, matched the competitor’s specs and size, and guess what? Our price was $4,500 less than the competitor’s quote for the same size sign with a better resolution. Mega doesn’t even make a 20mm in the Premier LED anymore and we haven’t for several years. The customer later admitted that they wanted the larger sign, and they nearly made a huge mistake. They only looked at the prices and assumed the products were similar so he was glad I caught it because if a smaller sign had shown up, he was sure he would have been tarred and feathered and then run out of town on a rail. 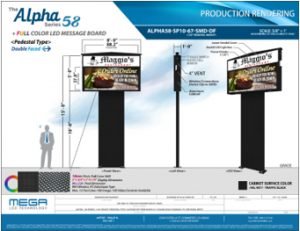 Although Mega LED Technology typically offers the least expensive sign available, that’s not always the case. That’s because we also have many extras like free lifetime diagnostics and free LED graphics/animations (over 300 made by our artist). We also provide free lifetime training on the software (cloud-based), instead of just throwing a manual at you and telling you to figure it out. I’ve had quite a few customers who want our LED signs with all the extras at the cheap, Chinese product price. It’s not going to happen. I’ve been selling signs for 27 years (as of 2022) and I can honestly say that not everyone can afford our quality, and very few can match our specs and price. Mega is the manufacturer and the industry leader, so our price on the same size LED and resolution is usually lower.

How long do LED monitors last